I recently had the opportunity to visit Fallingwater, which is located in southwest Pennsylvania nestled between Bear Run and Ohiopyle State Park. Even my drive on the narrow Sugarloaf Rd. to get there was enjoyable because of the fall foliage I encountered on the way. 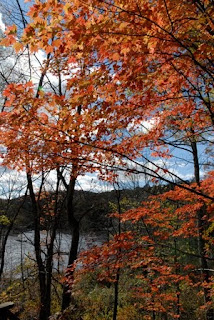 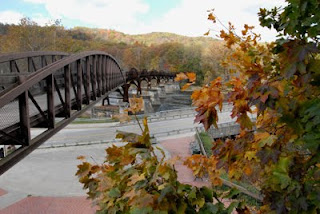 This post will basically be a summary of my tour. One of the themes that kept being stressed by my tour guide was the way in which some of Frank Lloyd Wright's buildings, especially Fallingwater, reflect the structure and materials of shipbuilding. Black Walnut, Wright's signature wood that is used throughout Fallingwater, is also a material that is often used to build ships because of its ability to resist water damage. Fallingwater is built over a natural waterfall, so in addition to the aesthetic properties of the wood, Wright also chose it for practical reasons. Another ship reference is apparent from Wright's decision to name a certain staircase leading down to the water "the hatch." The staircase is typically covered by glass, but this transparent covering can be removed so that one can more immediately experience the natural surroundings. Finally, the bedrooms were quite compact like the cabins one might find on a ship. The low ceilings of these rooms continued this connection and also worked to push the viewer's eye outside.

Although I have mentioned Black Walnut as one of the building materials, the majority of the building is made out of reinforced concrete. He used a cantilever design to balance the structure. Amazingly, the home has practically the same amount of outdoor space as indoor rooms. All of the balconies designed by Wright make this 50/50 divide possible. Using reinforced concrete in such a wet environment was not a very practical decision. For example, in order to make the concrete overhang which attaches the main house to the upper guest house, the entire piece had to be made as a single piece. Only one concrete pour was used for this structure so that there would be no separations where water could weaken the overhang.

Other features of the house that I really enjoyed were simply its contents and its openness. Throughout the home there were Tiffany lamps and lots of artwork. 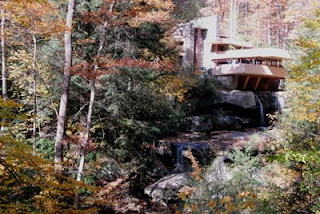 The home itself was inhabited by the Kauffman family. Fallingwater was built in 1935 by Wright after a ten-year period in which he had not had a significant architectural project. Edgar Kauffman, the son of Edgar Kauffman Sr., studied architecture under Frank Lloyd Wright and was responsible for eventually entrusting the home to the Western Pennsylvania Conservancy. Edgar Kauffman Jr. was a lifelong bachelor who pursued his interest in architecture by acting as a professor of architectural history at Columbia. He lived in the very top rooms of Fallingwater, which are almost separated from the rest of the home like a tree house. In order to reach his apartments you have to take an external staircase. Most of the three small interconnected rooms that he called his home where filled with bookcases. He even added an additional bookcase which covered one of Wright's windows. His bed was situated so that the rising sun from the east would wake Kauffman early each morning. There were no drapes or curtains in the entire home. Finally, Kauffman even had a reading board installed on an adjustable pole directly next to his bed. All of these features of Kauffman's apartments made him an extremely interesting individual to me and someone who I would like to learn more about.
Posted by Meredith Hale at 12:22 PM No comments: