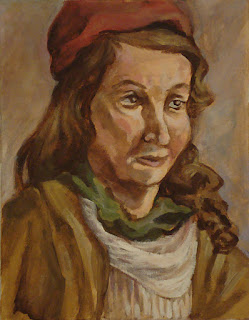 I had to take a pretty long hiatus away from Bay Arts because of work, but I finally made it back to a Friday morning portrait session this week. It was nice to paint again.
Posted by Meredith Hale at 3:07 PM No comments:

Recreating the Jewish Memory: A Brief Study of Two Novels 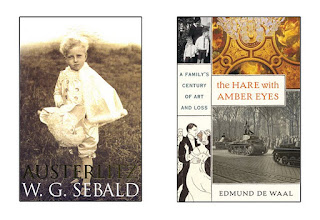 While reading Edmund de Waal's new best-selling novel The Hare with Amber Eyes: A Family's Century of Art and Loss, I was constantly reminded of another novel, W. G. Sebald's Austerlitz, which I read approximately two years ago. The Hare with Amber Eyes attempts to recreate the history of the grand Ephrussis family through tracing the history of a group of 264 netsuke that were passed down through the family and were eventually inherited by the author, Edmund de Waal. Netsuke are small Japanese carvings that serve to secure pocket-like containers to an individual's clothing at the hip. Austerlitz is the story of the an architectural historian who tries to figure out what happened to him and his family during WWII. Both stories include a smattering of photographs throughout their pages and deal with reconstructing the lost past of a Jewish main character and that of his family.

The photographs of The Hare with Amber Eyes are generally predictable and primarily serve as factual documentation, while the photographs of Austerlitz are often quite thought provoking and sometimes odd. The photographs in The Hare with Amber Eyes are all historical and include many images of the authors relatives. None of the photographs in Austerlitz on the other hand are actually historic, but there is a feeling that they could be. Some of the images include pairs of strange eyes (of both humans and animals) and a haunting image of a woman who is perhaps Austerlitz's mother. Also in the book is a picture of the Gare Saint-Lazare train station, most famously depicted by Monet. Train stations seem to constantly haunt the main character, Austerlitz, and over the course of the novel the reader learns that this may be because he was sent away from his family in Prague on a children's transport to live with a British family during WWII. The picture of Gare Saint-Lazare in the book is especially important because Paris is the last place to which Austerlitz can track his long-lost father. Austerlitz's father is never found, but Austerlitz comes to the conclusion at the end of the book while standing in Gare Saint-Lazare that his father must have left Paris on a train in that very station. As one can infer from the events surrounding the Gare Saint-Lazare, places have special meaning in Sebald's Austerlitz. 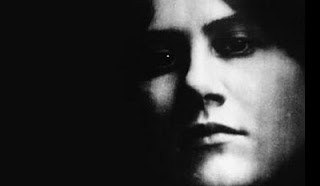 Photograph possibly of Austerlitz's mother
The importance given to places and their architecture is another commonality between the two novels. One of the passages that has stayed with me since reading Austerlitz is the book's discussion of the psychology of architecture. Sebald writes that building fortifications of any kind demonstrates that one is fearful. In the end Sebald thinks that building barriers or fortresses has the opposite effect of what one intends. Instead of making things safer, constructing fortifications draws attention to an area's greatest weaknesses. In an odd way, it seems that one is safer and more confident without fortifications. Because Jacques Austerlitz is an architectural historian, long discussions on somewhat random topics like this make sense and allow the reader to find the main character more believable.

The Hare with Amber Eyes also is very particular about the places and spaces found in its pages. Through reading the book, or listening to interviews with the author (like the one included below), one can see just how important it was to Edmund de Waal to spend time in every place that his ancestors had. The author, like Sebald, also believes that architecture can have a psychological effect on inhabitants and passers-by. While exploring the Ringstrasse in Vienna, de Waal shares an unusual observation about his grand imperial surroundings. He writes, "It is so big that a critic argued, when it was built, that it had created an entirely new neurosis, that of agoraphobia" (113). Attributing the creation of the fear of wide open spaces to a street and a collection of buildings is pretty original.

I enjoyed reading both novels because of the different ways that they both incorporate visual elements. The photographs, the subject matter of netsuke and architecture, and the constant descriptions that accompany the characters travels to great cities all emphasize the visual world.

Following this, I hope to read Bruges-la-Mort (1892) by Georges Rodenbach. It is supposed to be one of the first novels that included photographs. If I can manage it, there is a copy in French in the Cleveland Public Library, so I could work on my French while increasing my knowledge of fictional works that incorporate photography.

Some of the netsuke collection
Posted by Meredith Hale at 2:12 PM No comments: