Day Out in London: The New Sculpture Movement

Yesterday I spent the day exploring some London sights related to art history of the late-nineteenth and early-twentieth centuries. First I visited the Leighton House Museum, the home of Lord Frederick Leighton (1830-1896), who was an important painter and sculptor in the second half of the nineteenth century. Leighton is associated with both the Aesthetic and the New Sculpture movements. Leighton's Athlete Wrestling with a Python (1877) is noted as the first work in the New Sculpture style, which was recognized by its "concern for detailed modelling [sic] of flesh" (Read 315). Also inside the home is Alfred Gilbert's Icarus (1884), which Leighton commissioned himself. Gilbert is known for his sculpture of Anteros on the Shaftesbury Memorial in Piccadilly Circus. The highlight of the home is the Arab Hall. It even has decorated tiles with text from the Qur'an. Other highlights include Leighton's art gallery and his stuffed peacock (did I say Aestheticism!). Leighton's Flaming June (1895) is one of the many paintings in the home. The museum just recently opened this summer after a long period of renovation. It was definitely well worth the £1 entry fee I had to pay as a student. The museum website can be found here. 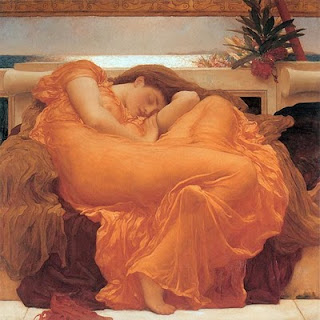 Flaming June
Another sight I saw related to the New Sculpture movement was the Selfridge & Co. department store. The most noticeable feature of this store is the sculpture, The Queen of Time (1928), above the entryway by Gilbert Bayes. Included below are some pictures I took of the sculpture and other decorative elements of the store. 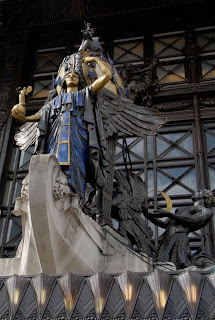 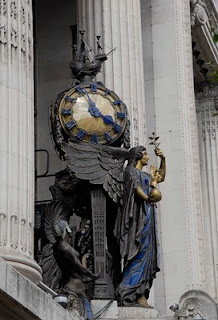 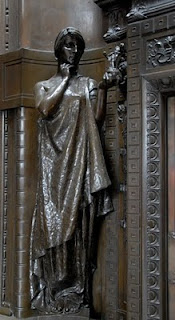 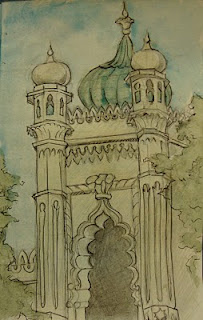 I've been volunteering once a week at the Brighton Museum and Art Gallery since May. One of the added benefits of volunteering there is getting to have my lunch break at the Royal Pavilion. I thought I should include a watercolor I did during my break today. It's not that precise, but I enjoyed making it.
Posted by Meredith Hale at 8:22 AM No comments: 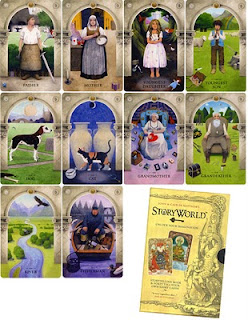 While in the gift shop at the Folklore center in Edinburgh, I found a box series of cards called StoryWorld. The product was created by John and Caitlin Matthews and is produced by Templar Publishing. The purpose of the cards is to help children create their own stories through the use of the cards which depict typical themes, characters, and objects from tales like the Toy-Catcher, the Magic Compass, the Dancing Doll, and many more. The arch included in the layout of the cards appealed to me and generally I enjoyed the work of all the different illustrators included on them. The image above shows the cards created by Paul Hess. Creating works following this sort of idea would be a good personal project for me. Please visit the StoryWorld website for more information on the series, artists, and creators.
Posted by Meredith Hale at 6:39 AM No comments:

Art and Design in Glasgow and Edinburgh 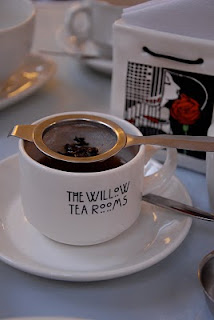 Now that my year abroad is coming to a close, I finally made the trip out to Glasgow to see the works of Charles Rennie Mackintosh, Margaret Macdonald, and Jessie Marion King. I also learned quite a few new names to add to my list of artists I admire through my travels in Scotland. While in Glasgow, I especially focused on seeing locations related to Mackintosh, such as the Willow Tea Rooms on Sauciehall Street as can be seen from the picture above I took during my visit.

One of the few sights that allowed me to photograph Mackintosh's interior design was the House for an Art Lover, which is southwest of the city centre in Bellahouston park. The house was originally designed by Mackintosh in 1901 for a competition set up by a German magazine, but it was not until 1989 that Hermann Muthesius took it upon himself to make these plans into a physical edifice. I was struck by the extreme contrast between the moods of different rooms. The Main Hall and Dining Room were characterized by dark shades of brown and purple while the Music Room was a space a dazzling whiteness. Mackintosh has used this contrast effect in other buildings. He often makes the entry of a building dark and then makes a subsequent room light and airy. One feature of the design that I found innovative were the various lighting fixtures Mackintosh used. Although every detail of the building is not perfectly consistent with Mackintosh's vision because there were discrepancies in his plans, I felt that the building was beautiful and authentic.
House for an Art Lover website 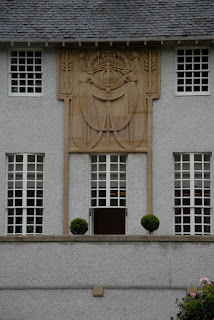 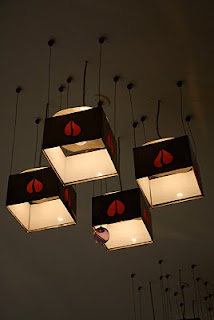 Lighting in the Music Room 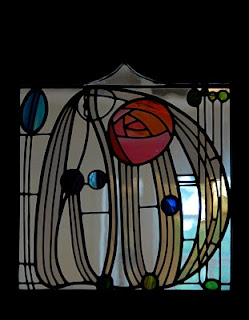 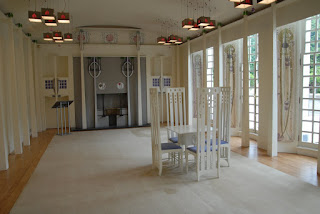 One new artist I discovered was Phoebe Anna Traquair. What my initial impression was upon being introduced to her manuscript work was that her style seemed quite similar to William Blake's. She was born in Dublin and was inspired by the Book of Kells to illuminate manuscripts. After marrying Dr Ramsay Heatley Traquair, she moved with him to Edinburgh and has now become known as "the first important professional woman artist of modern Scotland." She went on to illuminate manuscripts by William Morris, Robert Browning, Alfred Lord Tennyson, and others. Yet she did not confine herself to solely illuminating texts, but also worked with enamel, textiles, and jewelery and was a book designer. She was a critical figure to the Scottish Arts and Crafts movement. For more information on the artist, visit the National Library of Scotland page on her found here.

"The Victory." Panel 4 of "The Progress of a Soul" (1893-1901). Silk, gold and silver thread embroidery on linen. The National Gallery of Scotland, Edinburgh.

"The Progress of a Soul" is a series of four tapestries created by Traquair over the course of eight years that currently finds its home in the National Gallery of Scotland in Edinburgh. She created a number of tapestry series including the "The Salvation of Mankind" and "The Red Cross Knight." "The Progress of the Soul" is her most famous and was originally conceived as a retelling of Walter Pater's "Denys l'Auxerrois" in Imaginary Portraits, but the tapestries themselves actually very loosely refer to the story. Denys is a newcomer to Auxerre who initially brings renewal to all. Eventually this golden age ceases and people begin to blame Denys for the bad fortune that starts to encompass the town. Denys goes off into seclusion with monks and there discovers he yearns to make music. He successfully builds an organ to fulfill this interest and then goes back to the town, but is unfortunately not welcomed with open arms. The story ends with his fellow citizens tearing Denys limb from limb.

The tapestries in the series display some of this pain and suffering as is apparent from the titles of the middle two pieces, "The Stress" and "Despair." In "Despair," Denys is even given a wound in his side and in this way represents Christ.

The tapestry I both enjoyed the most and had the most difficulty interpreting was "The Victory," the final piece in the series. If viewed in seclusion from the other pieces, the sex of the person being embraced is somewhat difficult to decipher. Although one's initial instinct would be to assume that the figure is female, Traquair is actually depicting a same sex embrace with Denys being taken up to heaven by an angel. Also difficult to decipher is what the figure of Denys is standing upon. Elizabeth Cumming, one of the best known critics of Traquair, writes that this is the jaws of hell symbolized through the mouth of a reptile. Prominent in this piece and many other of Traquair's works is the symbol of the rainbow. Here it is meant to represent the link between heaven and earth. 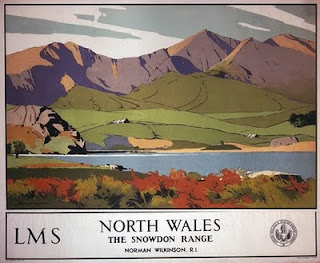 While visiting York I went to the National Railway Museum (NRM) and discovered the artist Norman Wilkinson. He was a British artist that lived from 1878 - 1971. Wilkinson is known for his marine paintings and his railway posters for LMS (London, Midland and Scottish Railway).
To see more of his railway posters click here.
A website on his life and works is currently in progress and can be found here
Posted by Meredith Hale at 6:01 AM No comments: