In October of this year I flew out to visit my sisters in Los Angeles. Along with seeing my second oldest sister's apartment and meeting her two cats, Rosalie and Esteban, I also took the opportunity to see as much art as I could. Some of this art was found in a typical museum setting at the Getty, but I also saw quite a bit of interesting art while wandering downtown LA. 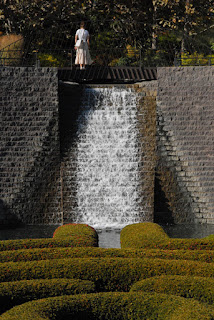 The Central Garden at the Getty by Robert Irwin

My twin sister was nice enough to accompany me on my self-planned walking tour of downtown in return for shopping with her later in the day. Our first stop was the Oviatt Building which once served as a penthouse for owner James Oviatt as well as a haberdashery, or men's outfitter. One of the special features of the building is that it includes glass details by René Lalique. Included below are a few pictures of the entryway. 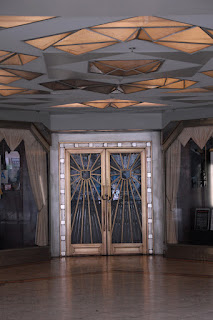 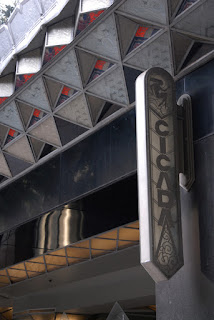 Other sites included several theatres, the LA public library, Angel's Flight, and the Eastern Columbia Building. I really enjoyed the bright colors and unique fonts used on all of these buildings. 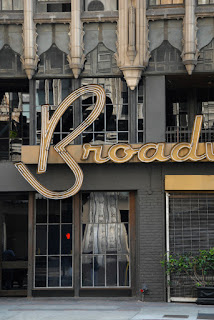 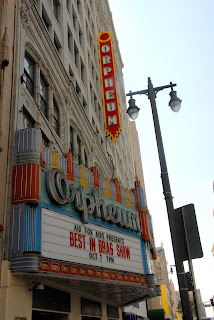 Since arriving home, I was recently reminded of my trip while watching an episode of the Office online. The unforgettable bright turquoise Eastern Columbia building was featured prominently in a Lexus commercial I saw while watching the episode. Included below is one of the commercials that shows the building. 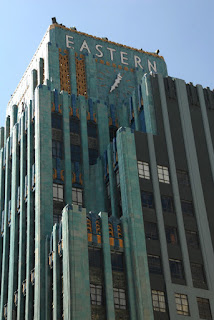 The fact that the Eastern Columbia building is included in an advertisement for a luxury car speaks to the current popularity of Art Deco. Apparently it is "cool" enough that a frame of the Eastern Columbia building can fit seamlessly into an advertisement that highlights partying and cruising on a Friday night. From athletic shoes to women's fashion, retro is currently in demand. 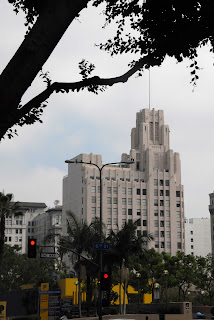 Building included at the end of the commercial

What is troubling is that the images of downtown LA included in these commercials are probably not recognizable to many people, even those that live in Los Angeles, because the downtown area in LA is not the social center it could be. While the downtown definitely has nightlife, during the day I saw that many of the city streets were inhabited prominently by the homeless. In some ways the anonymity associated with the buildings downtown works well for the commercial because it makes it so that the audience does not immediately connect the car to a very specific geographic region. This allows viewers to identify more closely with the commercial and the product. Including more iconic buildings, like the Empire State building, would immediately limit the ad.

Still, while the relative obscurity of edifices like the Eastern Columbia building serves the purpose of the commercial, it it does not bode well for the city itself. If these buildings are unfamiliar to most, that means the downtown area is not often frequented by visitors and residents. In the field of urban studies, much has been written about how the downtown areas of many cities are dying and the negative effects that come with this trend. One well-known publication on this topic is Robert M. Fogelson's Downtown: Its Rise and Fall. Much needs to be done to resuscitate America's downtown city centers.

In my opinion, historic buildings have the potential to revive activity in downtown areas that are no longer thriving by promoting tourism and creating interesting and beautiful environments. It seems that the city of LA agrees with me on this because on their tourism website they include several posts on architecture that visitors might want to see. Most notable is their current post on buildings featured in the film (500) Days of Summer. The Eastern Columbia building is one of the edifices that makes an appearance in the film, but it can only be seen for a mere second or two. As the home of Hollywood, it makes sense that much of Los Angeles tourism is connected to film.

In a small way, the inclusion of architecture from downtown LA in commercials can also help promote and build the city center. Yet, for the commercials to succeed in doing this, the landmarks included must be recognizable. I personally do not believe that images of downtown LA are yet ubiquitous enough to be easily identified by the typical American, but I hope that one day soon they will be. I greatly enjoyed my trip to LA and hope that visitors and residents alike are drawn to its historic buildings in the future.
Posted by Meredith Hale at 7:36 PM No comments: