For the last two months it seems like what I identify as my home address is constantly changing. One week when I get my hopes up that I'll get a job in southern Ohio my address on resumés suddenly switches from my current residence in Westlake, OH (near Cleveland) to my hometown of Piqua, OH. And the next week when I realize my chances of making my life work out in a city like Cleveland are much more likely than those in my tiny hometown the swap occurs again. This swapping has not only been mental, but has also involved quite a few trips up and down I-75 for interviews and to see my family. Truth be told, I'm not certain that either city is where I'll end up, but they're all I have for now.

I recently decided to liven up one of these jaunts down I-75 with a short stop along the way in Findlay to see a museum and visit a friend. Often I assume that opportunities for culture and art in Ohio only exist in the three big cities that all begin with the letter "C" (Cincinnati, Columbus, Cleveland), but I discovered during this short stop that many of the smaller cities have a lot to offer as well. The Mazza Museum of International Art from Picture Books in Findlay, Ohio proved this to me. The museum itself is only a single room with three different viewing areas and a small seating area for class groups, but the walls are filled with art and information. For each piece of artwork on the wall there is an accompanying binder on the artist and his or her life and works. Often the picture book the work is taken from is also included on the ledge beneath the piece. The museum was founded in 1982. Some of the first pieces to be acquired by the museum were by Jack Ezra Keats (an illustration from Apt. 3) and Steven Kellogg. Today the museum houses artwork from the 19th century to present day, including artists like Randolph Caldecott and Walter Crane. In fact, the museum holds so many pieces that it is constantly changing which pieces are on view to the public. I am looking forward to stopping in again at the museum to see a whole different set of illustrations the next time I visit. To visit the museum website click here. (Though the museum has a website, it provides very little information. I think this could be part of the reason very few people even know that it exists).

Directly below are some pictures of pieces I saw while visiting the museum. 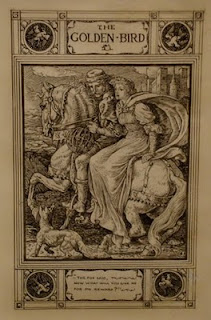 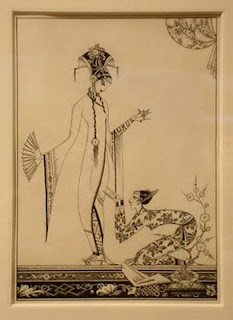 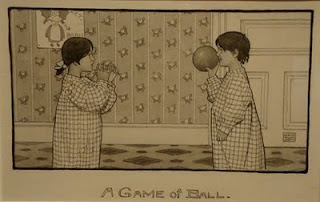 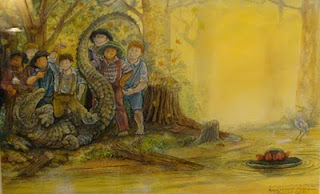 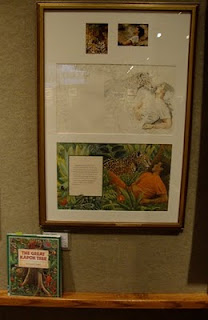 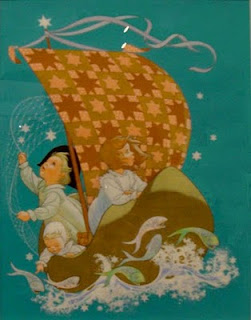 
Of these images, my favorite is the one by Sheilah Beckett. Although I would like to say otherwise, I actually was not aware of her art or her name before seeing the piece above in the Mazza Museum. I love the way she has designed out her artwork with shapes and color. Beckett is known for illustrating Sleeping Beauty, Beauty and the Beast, The Little Mermaid, and many more. Though not found in the museum, I especially like one of her illustrations from The Twelve Dancing Princesses (1954) included below. 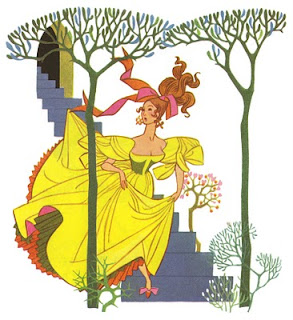 Clare Beaton is another artist whose work I first found in the museum. She is a British artist that sews all of her creations from fabric. Click here for her website.

Finally another artist whose work I really enjoyed was David Wisniewski. His books reminded me a lot of Ivan Bilibin's illustrations of Russian fairy tales. Wisniewski has won a Caldecott medal in 1997 for his book Golem. He also wrote and illustrated Elfwyn's Saga, Rain Player, Wave of the Sea Wolf, and Sundiata: Lion King of Mali. He led a very interesting life that included making his living as a clown for the Ringling Brothers for two seasons. He unfortunately died in 2002.
Posted by Meredith Hale at 8:35 PM No comments: